This could be huge. A judge in Arizona has ruled that the subpoenas from the legislature were valid and the Maricopa Election Board must turn over their voting machines and all 2.1 million votes from the county.

In every swing state, there has been one city that changed the election numbers from election night. In Michigan it was Detroit, In Pennsylvania it was Philly. In Georgia it was Atlanta and in Arizona, it was Maricopa County.

I see that I will not be disappointed with the results of the audit. Should it come back clean, I will know the Arizona election was fair and 2022 and 2024 would also0 likely be fair.

On the other hand, if they find a lot of illegal votes in a number large enough to swing the election, I would know corrections and safeguards will be added to preve3nt this in the future.

Also, if it is found there was cheating, it might prompt other legislatures to pursue the same type of audits for their states as well.

But, don’t get excited. Even if they find that they find Trump did actually win the election, he would not be named president because, with a few exceptions, the court is made up of liberal ideologues and cowardly conservatives.

They will either declare they cannot reverse the certification of the votes or they would authorize a new election.

“There is no question that the Senators have the power to issue legislative subpoenas. The subpoenas comply with the statutory requirements for legislative subpoenas The Senate also has broad constitutional power to oversee elections,” the ruling continued. “The Arizona legislature clearly has the power to investigate and examine election reform matters. Accordingly, the Senators have the power to subpoena material as part of an inquiry into election reform measures. As such, the Subpoenas have a proper legislative purpose. The Subpoenas also do not violate separation of powers principles.”

The judge added that “production of the subpoenaed materials would not violate confidentiality laws.”

In  response to the judge’s ruling, the state’s Senate Republicans issued a statement saying “we are grateful for the Superior Court judge’s ruling this morning that the Senate subpoenas are legal and enforceable, and it is entitled to audit voting equipment and ballots used in the November election.” 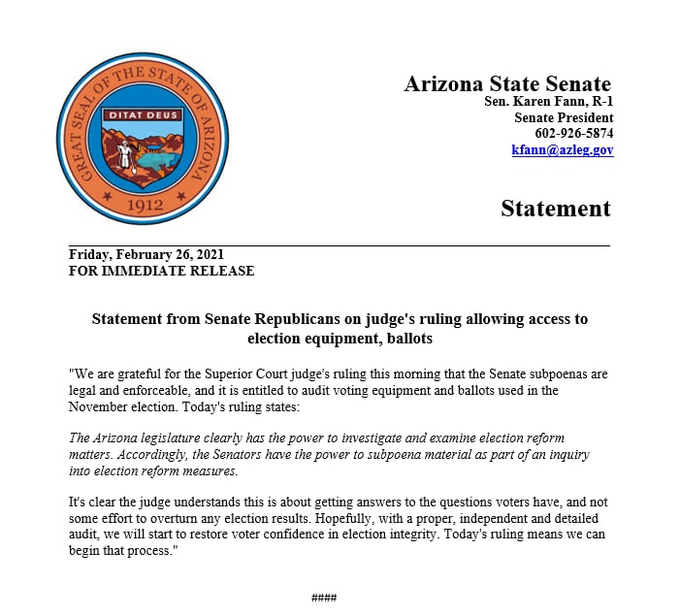 WATCH: Rep. Maxine Waters Protests Past Curfew in Brooklyn Center, Calls for BLM to Get ‘More Confrontational’ if Chauvin is Acquitted