The Biden White House’s new deputy director for political strategy and outreach, Natalie Montelongo wrote on Twitter on June 21, 2018, during one of the riots that targeted ICE: 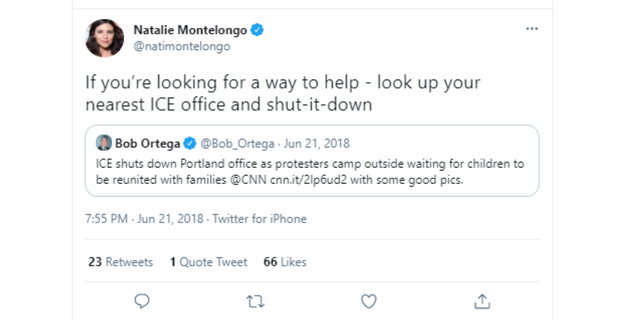 Do you still have doubts that Biden plans on flooding the United States with illegal aliens? He has the border wide open and no matter how heinous a crime one might commit does not guaranty they will be deported. In fact, odds are they won’t. ICE and the Border Patrol are our two main defenses against an invasion of hundreds of thousands of invaders trying to enter this country illegally.

“This administration’s actions are not motivated by public safety concerns – they’re terrorizing immigrant communities. #ICE didn’t exist 15 years ago, it doesn’t have to exist now,” Montelongo wrote on Twitter on May 10, 2018: 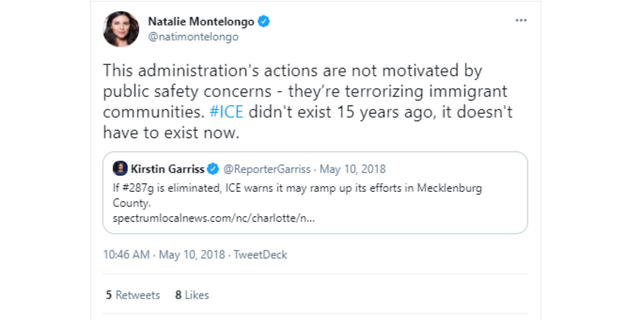 Montelongo previously worked in the Obama administration and as national political director for the badly failed presidential campaign of Julian Castro. Now she is working for Biden. She can’t win for losing. Maybe that is her niche in life. Castro ran on a platform that included decriminalizing illegal aliens who enter the United States.

“From a young age I remember having to cross back and forth from Matamoros to Brownsville to go school, that’s how I started going to school in the U.S. I have a lot of respect for the community. I think it’s a community that’s very resilient, it’s a community that, like myself, had to learn two languages from a very young age.”

“It feels like an honor to be working for the administration who elected the first woman vice president and how this administration also appointed the most women before the 100-day mark. It has the most diverse Cabinet and it has two women from the Rio Grande Valley working for one of the most important offices. I feel honored, and I think it speaks to what the vision of this president is. It’s a vision of being inclusive and making sure that everyone has a seat at the table.”

A spokesperson said in a statement:

“U.S. Immigration and Customs Enforcement (ICE) has concentrated its limited law enforcement resources on threats to national security, border security and public safety. This has allowed ICE to focus on the quality of enforcement actions and how they further the security and safety of our communities rather than the simple quantity of arrests and removals.”