Democrat Senator Mazie Hirono (D-HI) claims that the narrative about Democrats being out to impeach Trump since he took office is a conspiracy theory.

She might be right inasmuch as many Democrats were calling for Trump’s removal before he was even inaugurated.

But, you have to remember that honesty is not one of Hirono’s strong points. If it were, she’d be a Republican.

Her comments are hilarious when you consider the three-year conspiracy theory the Democrats foisted on President Trump over Russian collusion.

Even after Mueller and his nine little Hillary-supporting lawyers spent 40 million dollars and enlisted dozens of FBI investigators and they still came up empty despite the fact that Adam Schiff kept going on television every night, telling the lapdog media that there were mountains of evidence of collusion between Trump and the Russians.

In fact, even now after the collusion story has been proven to be false, the Democrats keep bringing it up at the sham impeachment hearing.

Dem Sen: It’s a ‘Conspiracy Theory’ to Think Dems Were Out to Get Trump

“What I found astounding was they’re still saying that we were out to get the president from day one, some sort of a weird conspiracy theory that I have to say, even [Supreme Court Justice Brett] Kavanaugh brought up,” Hirono said on MSNBC.

Hirono was referring to Kavanaugh’s contention in his confirmation hearing that “anger about President Trump and the 2016 election” led to an onslaught of unproven allegations. Kavanaugh did not mention impeachment in his hearing.

From The Gateway Pundit:

Democrat Senator Mazie Hirono says the idea that Democrats have been out to get Trump from day one is a conspiracy theory. pic.twitter.com/6lHSnpNq5A

It’s amazing that she could say such a thing with a straight face.

Who does she think she’s fooling?

Even the Washington Post was pushing impeachment right after Trump was sworn in. 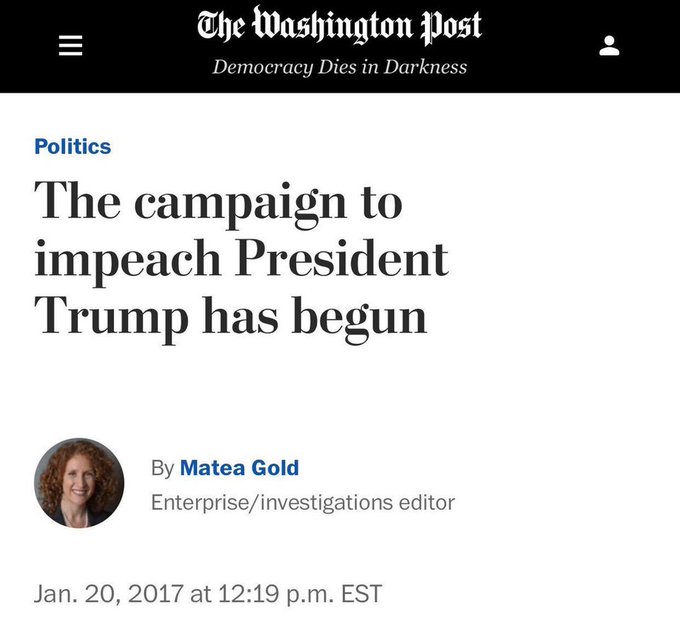 Senator Hirono knows what she is saying is a lie.

She just believes she can get away with it because Democrats almost never get any push back from the media when they say outrageous things like this.