Actor Vince Vaughn has caught a lot of grief for the fact that he shook hands with President Trump.

It is well known that Vaughn’s political preference is more conservative than most of the Hollywood denizens.

They are infected with Trump Derangement Syndrome and jump on anyone who dares support the president.

He met him while he was serving in an area known as the “triangle of death.”

It was a very dangerous area, and because of that, celebrities like the Denver Broncos refused to visit the soldiers serving there. In fact, no one ever visited them.

When Vince Vaughn found out that no one would go there and meet the troops, he decided to go.

He was briefed on how dangerous the area was, but that did not deter him. During his visit, there were mortars being fired at them.

Colby Smith told his story. I find it inspiring that a celebrity like Vaughn would risk death to visit soldiers that no one else would. 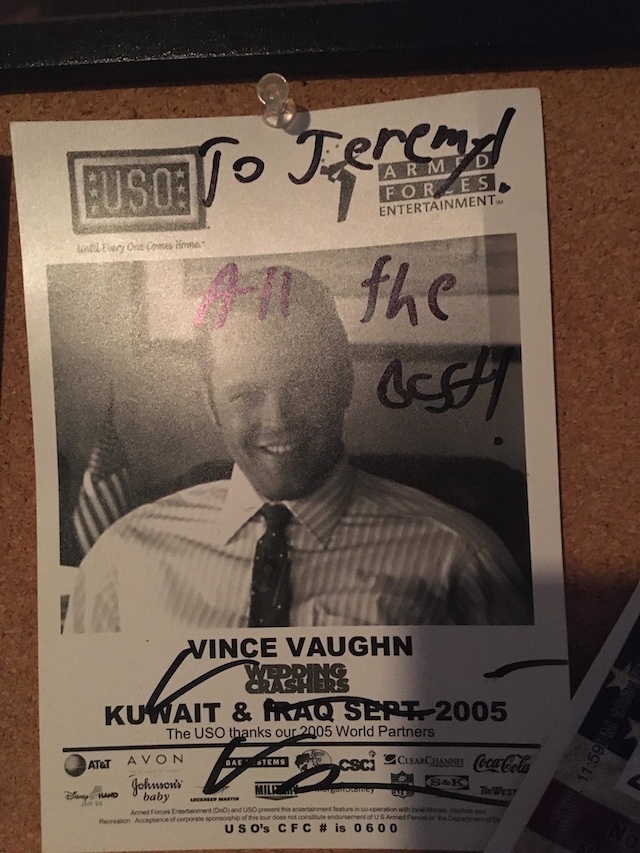 From The Daily Caller:

“When we got there the marines had just pulled out,” Smith shared, as he took us back to that day. “We had lost a lot of guys. I want to say 11 guys within a few weeks before he [Vaughn] arrived. It was a very tough time.”

“Like we heard about the Denver Broncos coming to Baghdad and no one ever stopped where we were at,” he added. “We were getting shot at. I got hit by four IED’s myself. So Vince Vaughn came, we got mortared.”

The veteran continued, “He [Vaughn] had been fully prepped that this was not a safe place. He did this [visit] because he heard that there was no one else coming to see these guys.  And he did.”

“He was perfect,” Colby went on to explain, noting how he lifted them all at a time they so desperately needed it. “He smiled, he was happy.  One of the guys in the unit made a sign that read,  ‘if you can dodge an IED, you can dodge a ball.’ He [Vaughn] thought it was great, so he was running around with the sign.”

“He figured out where the medic station was,” he added “[Vaughn] said, ‘I wanted to come see you guys.’ And he just hung out. He didn’t ask questions.”

Smith continued, while recalling how this “A-list actor” just sat there and played an X-box NCAA football video game with him.

“The way I felt, he was more in awe of all of us then we were of him,” Colby said.  “And that was really cool.”