There is never a dull moment with Donald J. Trump in the Oval Office.

For the first time as President, Mr. Trump commented on the Edward Snowden situation.

With AG Barr’s announcement that the first guilty plea has been accepted in the Obamagate investigation, the New York Post is reporting that President Trump polled his aides on Thursday about whether he should let anti-surveillance whistleblower and leaker Edward Snowden return to the US from Russia without going to prison, saying he was open to it. 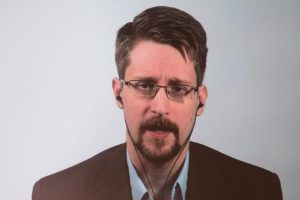 A highly debated character, Snowden is considered a hero to those who believe it is necessary for those who see government corruption, to do what is necessary to expose it.

In contrast, there are many who consider Snowden guilty of treason for sharing top-secret information with foreign governments, endangering Americans’ lives.

One example, a former CIA staffer and information leaker, previously testified that he believed Edward Snowden passed top-secret documents to WikiLeaks and thought Snowden should be executed for his actions.

President Donald Trump is now rethinking his position on NSA whistleblower Edward Snowden, the man who he once said should be “executed.”

“There are a lot of people that think that he is not being treated fairly. I mean, I hear that,” Trump told The Post in an exclusive interview in the Oval Office, before soliciting views from his staff.

Trump’s comments reflect a remarkable softening in his views about the man he once deemed a “traitor” worthy of execution. Republican lawmakers and the Justice Department’s inspector general recently highlighted the misuse of the Foreign Intelligence Surveillance Act and the secret FISA court to surveil former Trump adviser Carter Page.

“Snowden is one of the people they talk about.”

I am so internally divided on Snowden’s actions and understand both sides’ positions equally.

With our huge federal government continually increasing its surveilling of American citizens, and with the amount of corruption we see finally getting prosecuted via the Durham investigation, how do those inside the bureaucracy, expose illegal activities, in a way which respects our laws and still protects their very life?

I am not sure, corruption has always been with us, and technology is the end will not be remembered as a friend to mankind.

Biden Tells Chris Wallace During Debate He Does Not Support the Green New Deal, After Defending It And with It Featured On His Website – “The Biden Plan”

Joe Biden Refuses to Answer Whether or Not He’ll Pack the Court: ‘Would You Shut Up, Man?’