In the midst of all the bad news, there are uplifting stories about events that change people’s lives.

Life is a gift from God and Time, after saving faith, is a commodity most sought after. We can’t get it back, once lived, and what we do with it, will determine our eternal destiny and our legacy here on Earth.

Human life begins at conception as the cells and instructions in the baby’s DNA, starting working immediately to assemble, form, and develop each unique pre-born baby. 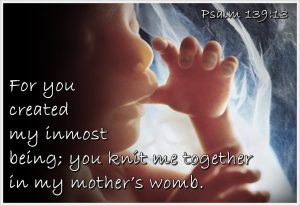 The goal of this article is to encourage all women to pursue LIFE and not look backward, condemning those who already made life-ending decisions, which can’t be changed but should also not be repeated moving forward.  God forgives and loves those who come to Him.

As explained in God’s Word, humanity has been killing babies from almost the beginning of time. For various reasons, but none justified.

Abortion in modern times has been a point of contention.  Some so-called pro-choice” activists, fight to give the mother the option to have her child killed, but in clinics, while she sleeps. Many times these clinics tell expecting mothers they are not carrying a baby, which makes it easier to allow the “procedure” to take place. Some women don’t feel like they can take care of a baby which leads some to also consider abortion, as their “only option”.

Pro-life counseling is a necessity outside of abortion businesses because abortion workers are not trained to give pro-life options to women. They are trained to sell abortions. With over 70% of post-abortive women stating they felt coerced to abort, ensuring that women have all of the facts and information before they choose to abort is vital to saving their babies’ lives and their own health as well.

Betty (not her real name) refers to the moment she found out she was pregnant as “the worst.” She felt “hopeless and helpless” and completely alone. Without a home or a stable income, she felt her only choice was abortion and made an appointment at a Marie Stopes abortion facility in the UK.

Unable to work because of extreme morning sickness, she was living in a room in an apartment. Her boyfriend didn’t have a stable job. Betty decided the best thing to do was to have an abortion so things could “go back to normal” and eventually she’d return to work. Abortion wasn’t what she wanted, but she felt as though it was what she had to do because of her situation.

“I went to my GP and I told him ‘I’m pregnant and I want to have an abortion,” she said in an essay for the group Be Here for Me. “He referred me to a clinic which they call Marie Stopes clinic in Ealing. I was 11 weeks pregnant.”

When she arrived at the facility, a pro-life woman named Lorraine was there, standing outside. From the moment Betty met Lorraine, everything changed.

“For me, it was definitely down to God that I missed a bus and was late because I may not have met Lorraine otherwise,” she explained. “I was looking really quite haggard at this point because I was throwing up so much. Lorraine smiled and gave me a big hug when I went over and I thought, ‘Ah, this person knows what I’m going through.’”

Betty told Lorraine about her concerns — her housing being number one. Lorraine immediately called The Good Counsel Network to inquire about a safe place for Betty to live. The pro-life organization helps women with pregnancy testing, moral support, medical information, legal advice, and practical assistance so that they can more readily choose life. This made Betty rethink her abortion, but she still went into the abortion business, which she said was “full of women.”

When her name was called to go back for the abortion, Betty couldn’t go through with it. Although the abortion worker was angry with her, she refused to be bullied into an abortion.

“So I went outside and spoke to Lorraine again,” she said. “She gave me another hug and told me ‘Congratulations!’ She called my boyfriend and told him the news and said that on Monday I would have a home! I couldn’t believe it!”

This story had a great ending which must encourage us to keep praying for the end of abortion and that more people would join groups like The Good Counsel Network, to make a difference in the lives of mothers needing the better option, LIFE.

Dr. Deborah Birx Says Americans May Have to Start Wearing Masks Inside Their Own Homes